“The artist who launched Minimalism was Frank Stella (b. 1936), who was still a student at Princeton when he saw Jasper Johns’s 1958 show at Leo Castelli Gallery. He liked the repetition of the flags, so many stars, so many stripes: their eschewal of ‘invention.’ He was also intrigued by the way Johns’s image was co-extensive with the shape of the canvas, without space around it—just the image in itself, presented flat and raw. ‘The balance factor isn’t important—we aren’t trying to jockey everything around,’ remarked Stella, and his words could have stood for all subsequent Minimalism, which aimed for an all-at-once take: a work of art which could be taken in at a single look, in which nuance didn’t matter—direct, macho, and very ‘American’. 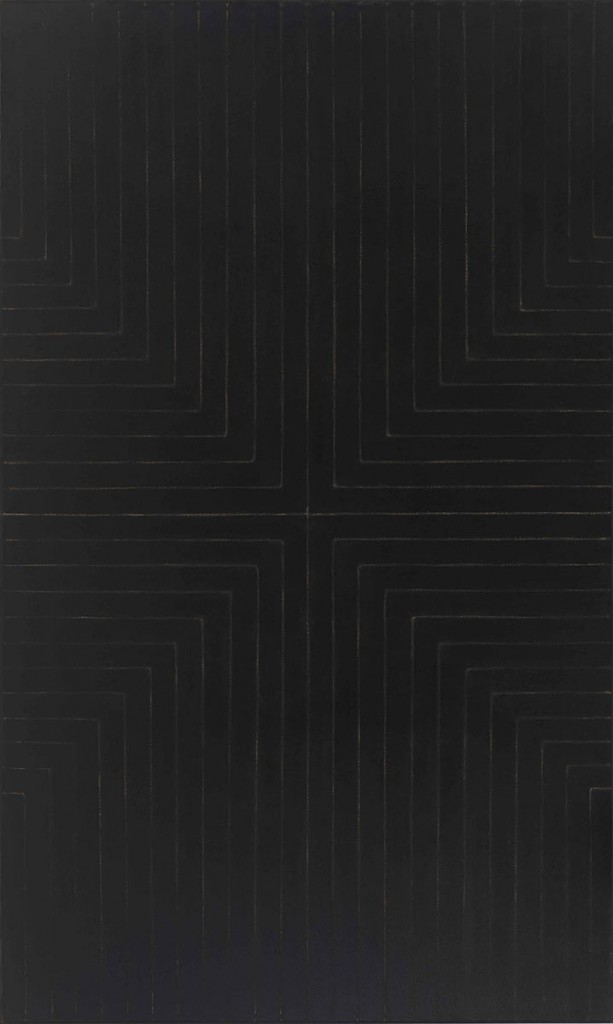 “Stella was an idea cruncher, and he set out to isolate each element in Johns that could be pushed a bit further. To stress the canvas as object rather than illusion, he shaped it with cuts and notches. To get rid of color-generated space, he used monochrome: first black, then copper, then aluminum paint. He used the framing edge of the canvas to dictate every form inside it. The painting was generated almost autoatically. The results…were about as close to flatness as Western painting had ever gone: those imposing, lugubrious structures of equal bands of black with no depth and no feeling of pictorial light, bearing their peculiarly and sometimes gratuitously emotional titles which sometimes came from Nazi imagery—Die Fahne Hoch (Raise the Banner High) from the Horst Wessel song, or Arbeit Macht Frei from the iron letters over the gate of Auschwitz….’My painting,’ said Stella in an interview, ‘is based on the fact that only what can be seen there is there….All I want anyone to get out of my paintings, and all I ever get out of them, is the fact that you can see the whole idea without any confusion….What you see is what you see.”

From Robert Hughes, American Visions, Alfred A. Knopf, 1997. “Frank Stella: A Retrospective” will be at the Whitney Museum of American Art, through February 7, 2016./