Don Porcaro has described his sculptures as occupying a psychic space somewhere between that of “the monster and the child.” They have strange appendages resembling toy-like plumbing, monstrous clumsy “feet,” and odd garments that could at any moment morph into a ballerina’s skirt or a schoolboy’s cap. In the last few years, made from stacked disks of heavy limestone and marble, the work has gained in solemnity and gravity, moving away from the earlier whimsy to a monumentality that has more in common with ancient traditions, like Greek columns or the hierarchical attitudes of Egyptian statuary.

But no matter how many metaphors you cite or analogues you find in the real world, Porcaro’s creations remain resolutely abstract. And even as they tweak the high seriousness of sculpture throughout history, these works never become overly cartoony—à la Koons of Lichtenstein—but remain rooted in the realm of art.

Porcaro, who is in his mid-sixties, was born in Newark, NJ, but grew up in Caldwell. In a profile in Sculpture magazine a few years back, he fondly remembered helping his father build and fix things around the house, and credits him with an early nudge toward sculpture. He got his B.F.A. from Fairleigh Dickinson, where he started as a music major, but also learned techniques in theater design and pursued photography. “I think the creative process is the same,” he notes. “The mediums simply differ.”

Gradually he became hooked on sculpture and entered the M.F.A program at Columbia. “The only person in the program who made a real impression [as a teacher] was Ronnie Bladen,” he says, but he recalls an unsettling visit during his second year from Isamu Noguchi, by then one of the grand old men of international Modernism. He arrived with an entourage of helpers and hangers-on, walked up to one of Porcaro’s works, and asked, “This is limestone? You can cut it with a saw?” He made a circuit around the sculpture and then left, saying nothing more. Porcaro was thoroughly perplexed until a Japanese friend excitedly told him, “Noguchi really liked your work!” Porcaro asked, “What are you talking about?” The friend explained, “He’s the master. That’s all he’s going to say.”

When he left Columbia, the artist took a job teaching at Parsons School of Design and has been there ever since, winning distinguished teaching awards and serving as chair of the department. “I listen. I work directly with students. I try to understand where they’re at.” Asked how he manages to be so prolific as a sculptor while holding down a full-time job as an educator, Porcaro says, “If you want to do it, you do it. I made time, and I manage my life so that I have the time.” Besides, he adds, “my materials cost a fortune, as does my equipment.”

Porcaro says he first started making the work that defines him as an artist about 20 years ago. “Getting into the gallery system upped the ante for me” (for many years he showed with Kouros Gallery in Manhattan, until the owner decided to retire). In 2011 his work took a marked change in direction when he was invited to be the U.S. representative at a sculpture symposium in Slovenia. He discovered Croatian marble and “liked the way the variations of delicately colored stone allowed him to seamlessly integrate chroma, texture, and mass,” as critic Karen Wilkin wrote in an essay on the artist.  The substantial vertical forms—as somber and formal as palace guards—still have an “additive, improvisatory approach similar to that of his earlier mixed-media constructions,” she adds.

But not to get too serious about it all—because then these works would not be identifiably his—Porcaro notes the “whimsy of the big feet sticking out.”

The past couple of years have been exceptionally fruitful ones for the artist, with shows at Greenwood Gardens in New Jersey and the Visual Arts Center in Summit, NJ. As an offshoot of these, the arts council in Summit has asked him to place four pieces around town, where they will be on view from May through November, 2016. If you happen to stumble across one of them, Porcaro would certainly not take it amiss if you burst into smiles. 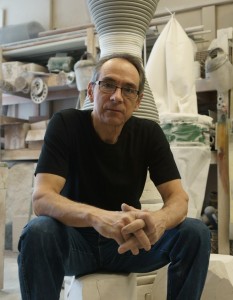 Don Porcaro lives and works on the West Side of Manhattan, where he shares a home with his wife, the artist Leslie Wayne. Both maintain studios back to back, he says, and “talk about each other’s work all the time.” More about the sculptor can be found at www.donporcaro.com.