Salvador Dalí is perhaps best known for his Surrealist landscapes of melting clocks, his Venus de Milo fitted with drawers, or his spectacular six-foot-tall vision of the Crucifixion. But Dalí was also a prolific draftsman and printmaker, as a traveling show of his illustrations makes abundantly clear. “Stairway to Heaven,” an exhibition now at the Hilliard Art Museum (through January 18, 2019), presents a comparative study of two of the master’s most celebrated portfolios, his book illustrations for the Comte de Lautréamont’s Les Chants de Maldoror (1868-69) and Dante Alighieri’s The Divine Comedy(1308-20).

As curator David S. Rubin notes in our interview, the two sets of illustrations represent two very different aspects of the artist’s development, The illustrations for Les Chants de Maldoror—exquisitely tortured visions of sex, violence, and cannibalism—were made in the 1930s, at the height of Dalí’s involvement with the Surrealist movement.  By the time his illustrations for The Divine Comedy were published, the artist had renounced Surrealism and became a born-again Catholic.

Our interview touches on Dalí’s still-provocative interpretations of the texts, his appropriation of a mysterious painting by Jean-François Millet, and his identification with Dante in a bid to atone for his earlier debaucheries, in art and life. As Rubin points out, Dalí paves the way for Warhol as a showman and celebrity, and his audacity and talent still mark him as an artist for the ages.

For more information on the show and venues, click here. 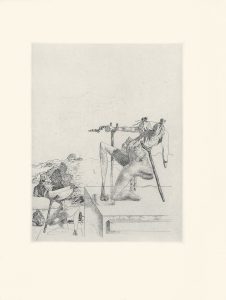 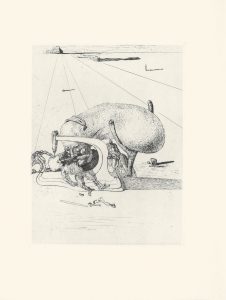 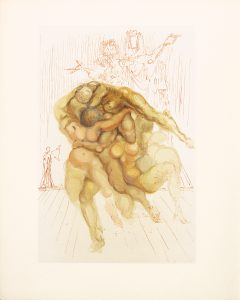 The Divine Comedy, Inferno, Choleric People, 1960, wood engraving in color on Rives paper after a watercolor, 10 by 6.25 inches 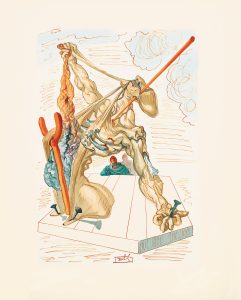 The Divine Comedy, Inferno, Falsifiers, 1960, wood engraving in color on Rives paper after a watercolor, 10 by 6-7/8 inches 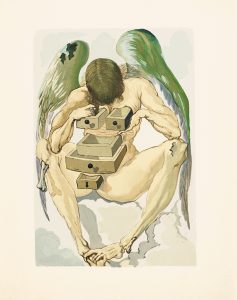