Afterthoughts on the 2015 Venice Biennale

Most reviews of the 2015 Venice Biennale came down hard on the curator’s “didactic,” “glum,” “joyless,” and un-spectacular show of conceptual, socially oriented works. It also disappointed those addicted to grandiose art spectacles, the art market, and blue-chip names. But during my autumn visit, it all came together in a resounding way. This Biennale demanded that you rethink almost everything. It may have been the most enlightening and consistent Biennale ever, a necessary antidote and smartly conceived vision of the sorry state of the world today. It was also, on a global scale, seriously depressing. That was decidedly not curator Okwui Enwezor’s fault. Blame the failures of humanity.

“All the World’s Futures,” as Enwezor called the 2015 Biennale, was more radically interpreted by the artists in most national pavilions than it was by Enwezor himself. I hadn’t yet ventured into his curated exhibition winding through the Central Pavilion and the Arsenale, but I couldn’t help noticing Oscar Murillo’s oil-drenched banners draping the Central Pavilion’s façade or the anti-colonial monuments of Raqs Media Collective. I hadn’t yet witnessed the sobering array of distressed, dissembled, carbonized, or demolished forms, images, projections, and entropic processes within. And I had not begun to absorb the reading at its heart–which continued non-stop from May through November: a dramatization of Karl Marx’s Das Kapital, staged by Isaac Julian. 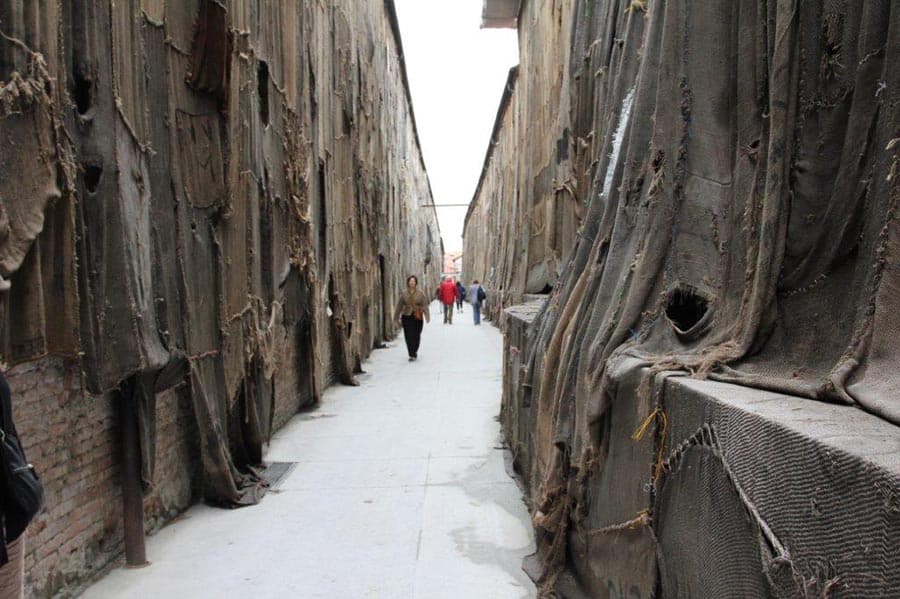 Ibrahim Mahama’s Occupation, 2015, an installation of jute-fiber sacks–used by traders to transport cocoa and coal across Ghana—lined the corridors of an exit from the Arsenale. Mahama was the youngest artist in this biennale.

After the first hours wandering through the national pavilions in the Giardini, my companion, who is not of the art world, gasped: they’re all about the end of humanity, they’re about the world after the extinction of human life.

Pamela Rosenkranz’s Our Product transformed the Swiss Pavilion into a swimming pool. Filled with liquid the sickly pink color of human flesh—like mad-dog Englishmen in the noonday sun—it contained Silicone, Necrion, Neotene, Evian, Bionin, and Viagra, plus hormones, synthetic musk, and symbiotic microorganisms. This liquid recreated not only the look of northern European skin but artificially reconstituted its component parts. Set against glowing greenish walls, imbued with the scent of baby powder and the synthesized sounds of water, this liquid mass of melted people was a chilling sight. 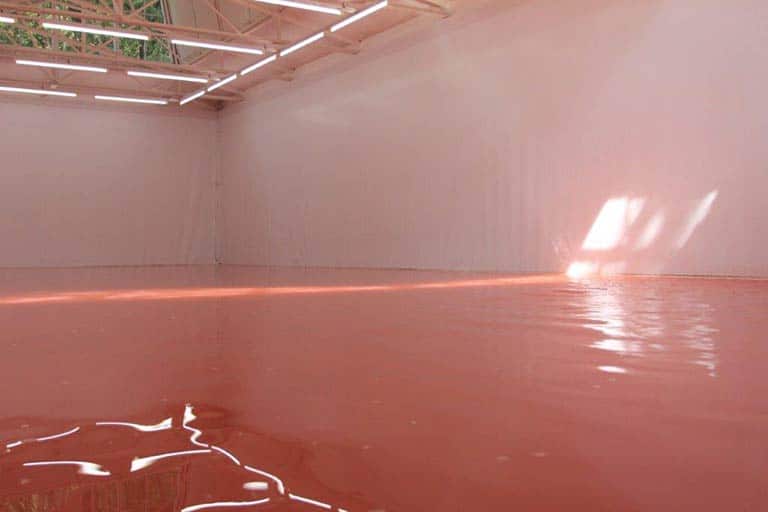 Pamela Rosankranz’s Our Product, a pool with synthetic substances, lights, sounds, and smells, transmuted the Swiss Pavilion into a body.

Celeste Boursier-Mougenot’s Revolutions in and around the French pavilion, which had been opened to the elements: It took a moment to realize that these eight majestic motorized living evergreens—their roots planted in enormous clumps of earth wired with technological sensors—were in fact mobile. Propelled by the sounds of their own sap and metabolism, the movement of spectators, and their will to migrate, one rotated at what was once called “glacial” speed. Another crept along imperceptibly—changing direction at obstacles like some ecological apparition. The world, like those creeping Scotch Pines, would get along very nicely without us. 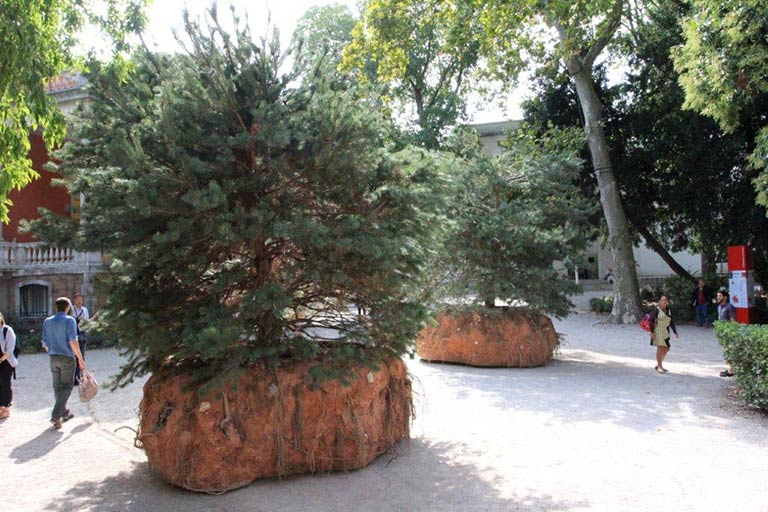 The minuscule elements of Marco Maggi’s “Global Myopia II (Pencil and Paper)“ that colonized the walls of the Uruguayan pavilion—which appeared vacant at first sight—were barely visible except to the acutely myopic. Made from a portable kit of 10,000 different shapes cut from self-adhesive paper, this vast wall installation of tiny abstracted forms and shadows, which took Maggi three months on-site to assemble, begged to be interpreted as overpasses, arenas, and other codified fragments of sprawling megalopolises. Playful yet deeply troubling, it could have been an aerial view—by a survivor or an alien—of an incomprehensible planet (our own?) in which urban planning had given way to chaotic sprawl. 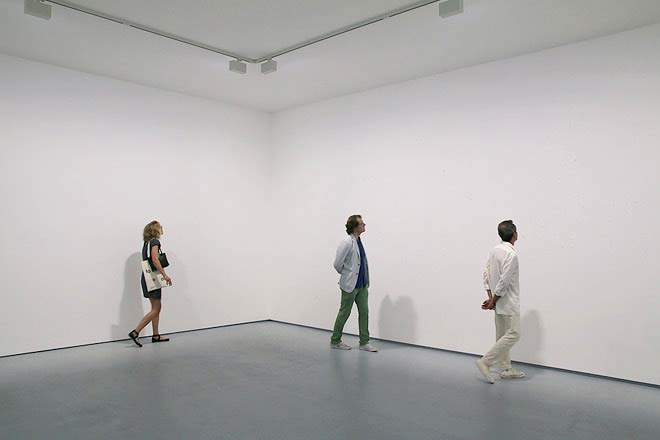 Even Sarah Lucas’s rubbery custard-yellow figures in the British Pavilion, including two flippant colossi, were hardly human. Reduced to bulbous tits and pendulous scrotums, matched to yellow walls, accompanied by lower-body casts with naughty cigarettes protruding from orifices, they alluded to sex, death, and humanoid irrelevance, although I very much doubt that was a point she meant to make.

Joan Jonas’s elaborate installation in the U.S. pavilion won the Golden Lion, but I preferred Fiona Hall’s Wrong Way Time in the Australian Pavilion. A cabinet of curiosities containing some thousand crafted conceptual objects, it had to do with colonial trade, the penal colony, and the natural environment. Ticking mantel and grandfather clocks lined the outer walls along with burnt volumes of the British Museum’s General Catalogue of Books and “animals from another time,” fashioned from grasses, feathers, and buttons by Hall and eleven women from an indigenous group of desert weavers. An inner cubicle of glass cabinets contained bread sculptures, sculptures cut from sardine-cans, nests of extinct birds woven from currency, and more. Within the innermost sanctum hung fierce avenging tribal masks, woven from shredded French, German, and British army uniforms. “Dare I say it, this biennale isn’t a ‘wow’, but this apocalyptic diorama is,” said the attendant, adding, “I’m a bit of a Mad Max fiend myself.” 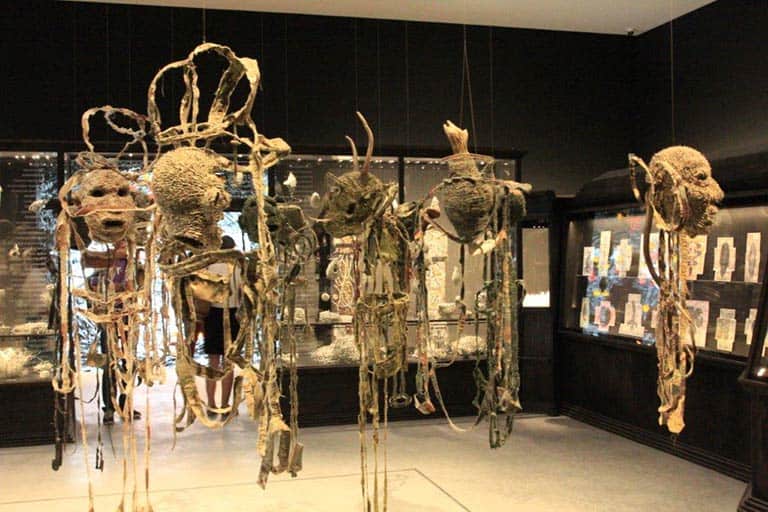 If the work in the pavilions reflected the implications of Enwezor’s title, his curated exhibition—copiously written about elsewhere—was not didactic or glum but a coherent, compelling, and subtle reading of the global crisis by a seasoned Nigerian-born curator who chose artists from everywhere. He made it perfectly apparent that the industrial revolution, colonial expansion, and asymmetric cycles of import and export had brought our present untenable situation about. The trenchant works he selected agreed that we had no future on this planet. Ibrahim Mahama’s corridor of jute-sacks—used in Ghana for transporting exports like cocoa and coal—through which you exited the Arsenale, emphasized our doom. 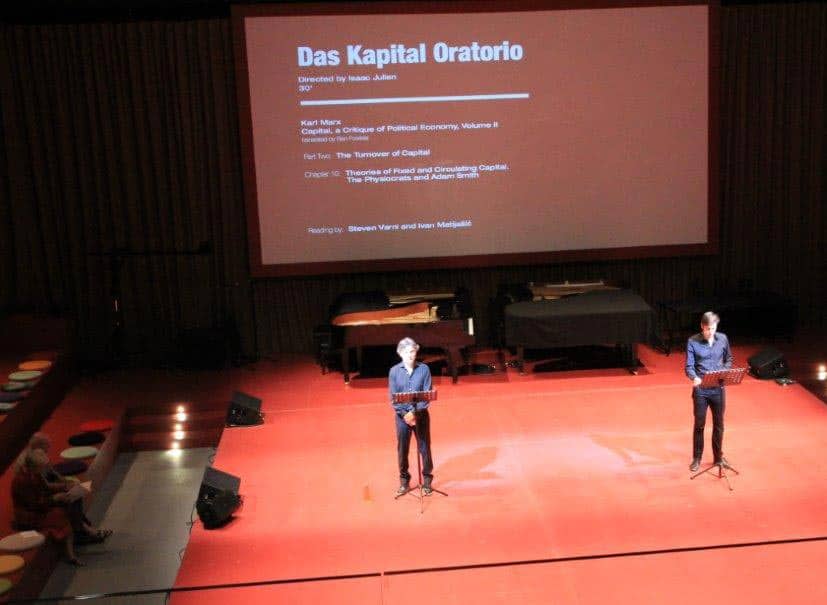 Kapital, continuous readings of three volumes of Das Kapital (1867-1894) by Karl Marx, staged by Isaac Julian in the Central Pavilion Arena from May through November.

Two projects powered this Biennale. Marx was the radiating engine at its core, a constant reminder that the opposing forces of the 19th and 20th centuries led to our unraveling global economy, in its infected context of trash and destruction. The other crucial project was e-flux’s dematerialized “Supercommunity,” which imploded from the Internet. These entangled daily missives circulated a barrage of learned, historic, opaque, sometimes obtuse and occasionally inane texts by artists and theoreticians around the world. Linking the personal, political, and poetic, their insights ranged from Nicolai Federov to the Dogon concept of Sirius, the implications of Mercury Retrograde, and the insights of a talking parrot.

Where on the list of endangered species is our own? Some scientists predict that homosapiens may go extinct by the year 2050. Greenland is melting, seas are rising, a splitting Canary Island threatens to cause a tsunami, inundating the East Coast of the Americas—and the long-dormant super-volcano in Yellowstone is overdue for a mammoth eruption that would bury the western states and darken the world. And humanity is being held responsible for causing the Sixth Great Extinction. The age of the Anthropocene is upon us: human actions, technological aftereffects, and natural forces are now inextricably intertwined in a fatal dance. Is it Enwezor’s fault that I can’t stop thinking about the dismal fact that we may be doomed for extinction like the dozens of hominid species that preceded us? Shall I blame him because I suddenly recalled what the sentient program “Mr. Smith” revealed to Morpheus in The Matrix: It is we who have become a virus and plague. This wasn’t a biennale to be liked or disliked with a smiley face or to be dismissed with a “wow.” We should thank Enwezor for making our predicament both terrifying and apparent. 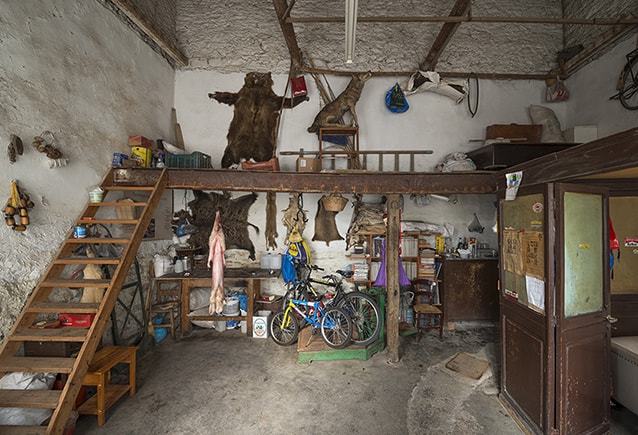 Maria Papadimitriou’s Agrimika in the Greek pavilion transported an actual-fur tanner’s shop to Venice, with a video of the owner regretting his life and our inhumanity to animals. (Photo, courtesy Greek pavilion.)

One final oracular note. “All the World’s Futures” told it like it is, or like it soon would become. The works uncannily presaged events that had yet to happen when this Biennale opened in early May: the fleeing people left to die in boats or trucks, a drowned child on a beach, the flood of Syrian refugees that overwhelmed Europe while I was in Venice. Enwezor managed to change the discourse, within the art world and beyond. That’s no small feat. And as for religion—the 800-pound gorilla in our midst—let’s remember Christoph Buchel’s short-lived project for Iceland: a functioning mosque in a deconsecrated Catholic church, which was closed down by Venetian police on May 23 as a security risk.

Kim Levin is an independent critic and curator who was a regular contributor to the Village Voice until 2006. She has also written on art for ARTNews, the Brooklyn Rail, Art-Agenda, and other publications internationally. A book of her essays on art is in the works.