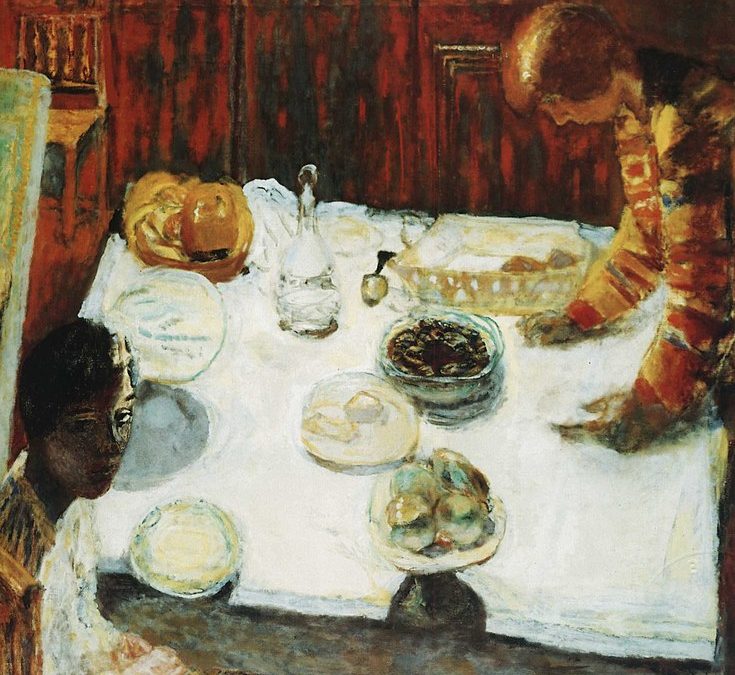 Dede Coogan and I were friends for much of grade school, spending long hours in her third-floor bedroom with the cozy slanted ceiling and biking to classes together while I still lived across the street. We nurtured a private language called “obtalk,” which is easy enough to figure out once you get the hang of it: just put “ob” after every consonant, as in “Coban yobou gobive mobe sobome mobonobey?” (“Can you give me some money”?). Kids picked it up easily, but our chatter drove the adults around us batso, and of course that was part of the point.

I was a little in awe of Dede, even though she was a year younger, because she seemed to have incredible aplomb. It is difficult to talk of a third- or fourth-grader possessing style, but somehow when Dede pinned two barrettes in her dirty blonde curls she edged toward a certain pre-pubescent movie-star glamour, a baby Bacall in saddle shoes. 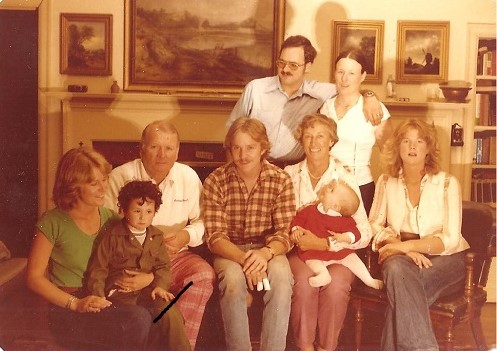 The Coogan clan, early 1970s. Dede is at the far left with a nephew on her lap. “Hottie” Lisa is at far right.

The whole family, in fact, seemed a cut above the usual postwar suburbanites in my parents’ social circle. My mother claimed that the Coogans descended from an old Irish family whose patriarch developed a neighborhood—Coogan’s Bluff—overlooking the Polo Grounds in Upper Manhattan. She told me the story of Harriet Coogan, who married into the family, and when she and her husband bought a house in Newport, RI, they hoped to be accepted by the Vanderbilts and Astors, but because she was Catholic and Irish, hobnobbing with the swells of her day was out of the question. She threw a party in her new mansion, prepared a lavish banquet, dressed to the nines, and no one showed up. There was a movie about Harriet Coogan, said my mom, and I have some dim memory of seeing a story about a beautiful woman shunned by snooty society, but I can’t for the life of me track it down.

If this was a lesson in the dangers of hanging out with Irish Catholics, it was lost on me. One of the things I most loved to do with Dede, at least for a year or so, was attend mass on Sundays. Our usual house of worship was a community church that adhered to no particular Protestant sect, but the Coogans were Catholic and that set them apart from many of my parents’ friends. (My parents had no problems with my checking out Roman rituals because in general they felt religion was bunkum and believed their children would eventually concur.) 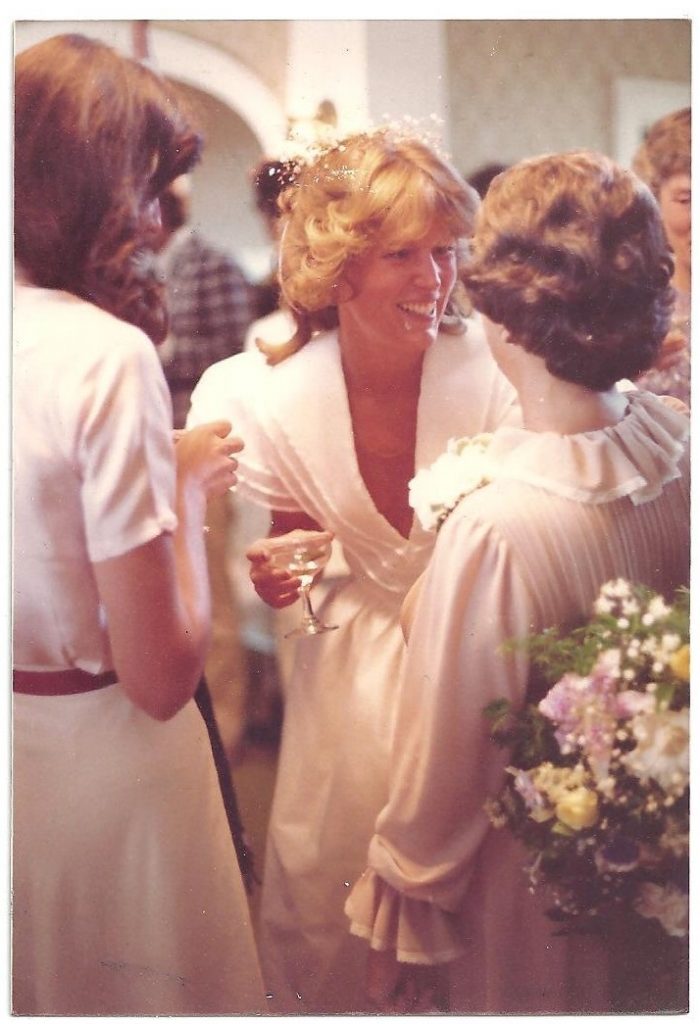 I borrowed one of the Dede’s lacy mass head-scarves and brought a string of my mom’s beads for a fake rosary. Everything in the Catholic church was thrilling and mysterious. The mass was still in Latin in those days, and the priest, in his long embroidered vestments, swung a censer as he walked down the aisle. We were endlessly kneeling and standing and slipping the beads between our fingers, Dede reciting some ritual response, me whispering in obtalk. After a while, though, the magic wore off—I felt like a real fake accepting communion—and I realized I preferred to be with my own family on Sundays.

Holidays were a very big deal at the Coogs, as my mother called them, where we celebrated Easter and Thanksgiving. Why my family didn’t reciprocate is a little fuzzy to me. Perhaps the Coogans simply had more family and, for a time, a bigger house. For sure the entertainment was better, with touch football on the lawn, home movies, Easter parades (we wore beribboned bonnets made from paper plates), and Dave singing at the piano. Both our mothers were Marys and so inevitably he crooned, “For it was Ma-ree, Ma-ree, plain as any name can be….”

The food, though, was terrible. I think I knew this even as a kid. That canned ham with pineapple was gelatinous and icky, as were sweet potatoes with mini-marshmallows, and it seemed to me that asparagus was not supposed to fall apart in shreds, bending its tired head when you picked up a stalk between your fingers. But Mary Coogan did have two recipes that could redeem any meal. Aromatic sage jelly, which slathered on dry turkey disguised the cardboard taste, and a divine chocolate soufflé, served in a long Pyrex dish and oozing with dark rapture. I believe she freely handed out the jelly recipe, which I lost long ago, but the soufflé was a closely guarded family secret, which I have had to reconstruct from various sources so yobou coban mobake itob toboo. 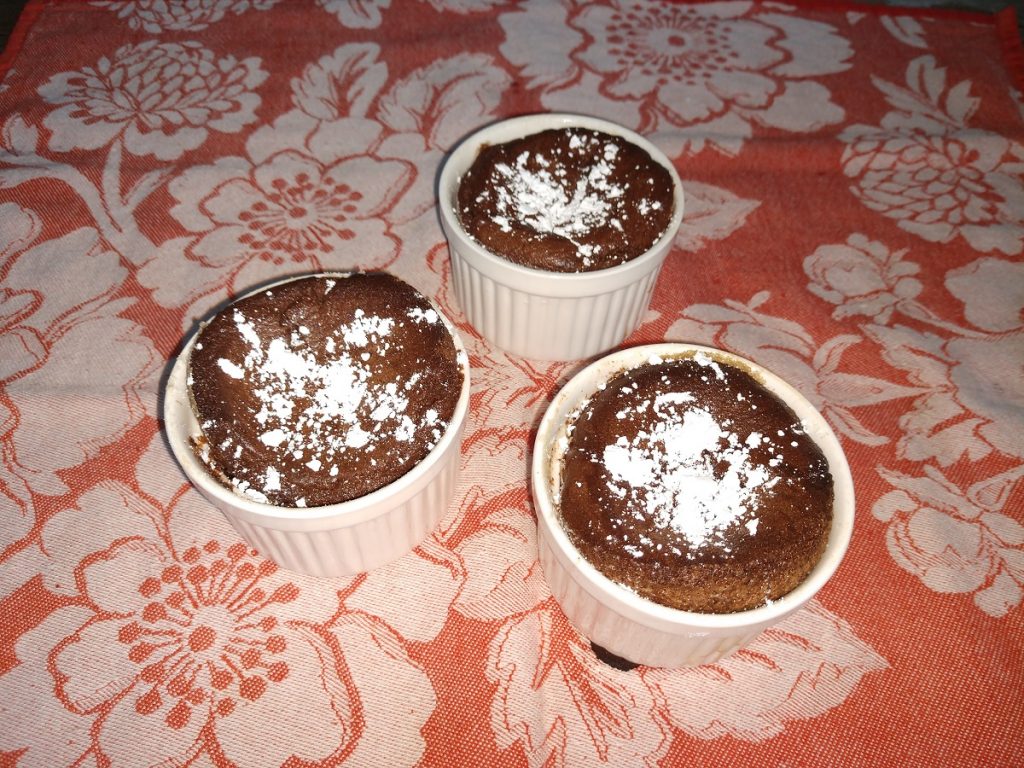 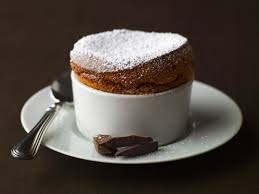